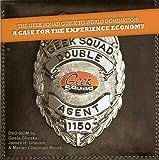 Ok.. so I go to this gathering of the geek squad. Well it wasn’t exactly for the geek squad.. I mean it wasn’t for people who work for Best Buy or anything.. cuz I don’t, and honestly most of the people in attendance were way over qualified to be of that kind of geek squad.

Evie had invited to me to it a week or so ago, but I’d already planned on going. It’s wierd getting geeky invitations from her because for all intents and purposes she’s not a geek. She’s not even introverted. She’s an extroverted .. sex addict.. ok maybe not a sex addict.. man addict who just happens to be semi-geek-literate, and a text-fiend. She normally does not run in my geek circles.

That said, she does often do her best to snag each and every geeky man that comes across our mutual paths. She does not usually play fair and entices them with a very open and raw sexuality that well… is like a bilboard for “I’m open for sex”.

As such, I kinda dread her being around when I’m networking or meeting potentially single men, because the only way to get a guy’s attention away from her is to out-sex her or play on his prudishness.. which most geeks have no prudishness, and its nearly impossible to out “sex” her without laying on the table naked begging them to do you. Whatever you do, she’ll do it bigger.

While none of you are under the impression that I’m innocent.. I am not one to out and out sell myself as a whore. (Sorry guys)

So anyway, I was dreading going and having to deal with her, but when I got there.. There she was sitting outside of the group.

I greeted my friends that were there, then went to say hi to her. She immediately started in on the group. Calling them nerds and saying that they were useless.  She complained like she’d expected there to be some Adonis there, and instead was surrounded by Hobbits.

“Sorry, these are my people.” I said to her, trying to imply that she was insulting me. Cuz she was. I didn’t even try to defend my geeky pals, because they needed no defense. She did. (Btw she has no room to name call any of them, as she’s dated some way ugly and geeky guys.. seriously, people I wouldn’t even think to touch.)

I did however meet a very hot and sexy German/Dutch/Something Dude. Accent. Geeky. Hot. And he was socially capable.. Should be illegal. I’ll be stalking him to find out if he’s married. We didn’t get a chance to talk much. (Hot Foriegn guys seem to attract all the females.)

What shocked me the most… I’d been running into this other guy for months now. Actually, I think he was one of the guys in a post a while back. I never knew for sure if he was single or not.. and in the last networking party, he seemed to be married or at the very least in a long-term relationship, so I’d written him off.

Turns out this hottie is in an open relationship. SOOOOOO tempting. I’m just not sure I could do it.. but I do know that the sex would be HOT.  He touched my arm while we were talking and little bolts went up my arm. Mmmmm

He’s also smart.. has great eyes.. and gazes into yours when you talk to him, and generally ignores everyone else. So good for the ego to feel like the center of someone’s concentration now and then.

4 Responses to “The Center Of His Attention”