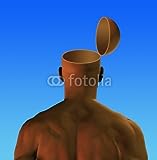 “Don’t be so open-minded that your brains fall out.” – My Dad

I’ll skip the formalities of height/weight, diet, drinks, religious views and all that… and skip down to the nitty gritty profile that this guy wrote.

When I read profiles, I skip most of what they say and read between the lines. Just as I would any online conversation (or offline conversation – aka we all know that girl that said I have “such a pretty face” was really calling me fat.)

Most of his profile sounds pretty good. He’s an attractive guy and seems to be legitimately looking for a real relationship.  Awesome.

However, he’s the epitome of why I avoid “open-minded people” or anyone who says they’re open-minded, or even those that use the term “open-minded”.

Much like my diatribe a while ago about people who say they’re looking for “drama-free” being drama queens.. It never fails that I find people who promote, advertise, and demand on “open-mindedness” to be some of the most closed-minded and judgmental people.

They’re just usually pretty quiet about it.. at first anyway.

While reading his short profile, I ran into a couple phrases which for me were red flags… but the clincher was the ending..

“You are open minded and honest. You think experience, health, and happiness are more important than money and possessions.”

This is what made it necessary to write this post. How open-minded are you, if you can in one sentence claim open-mindedness and the next judge people for valuing money?

It doesn’t help that earlier in his post he says this: “So if you are looking for a guy that makes a six figure salary, then you probably don’t have genuine priorities in life, and I’m not the one for you. 🙂 ”

Do you hear the money-hating judgement or is it just me? Did you know that liking money or financially successful men means you don’t have “genuine priorities” ?

In essence, I come away from his otherwise delightful profile with a sincere sense that he has a lot of anger about people with money (he probably secretly desires to be rich himself).  It’s not about ethics, or morals, or the absence of either of them. It’s about the presence or absence of money. He sounds like a guy who would punch a rich person in the face merely for the fact that they have money.

As a person who hopes to have my own money someday.. dating a money-hater is a complete no-go.

But his hating on people isn’t done yet..

“Also, if you are a chronic dater then that is not what I am looking for. High walls may keep out the bad guys, but they keep out the good guys too. 🙂 ”

Did you know chronic dating means high walls? I thought it meant that you hadn’t met the right person yet, or that you were a commitment phobe.

And for an open-minded guy, he’s doesn’t seem very perceptive. I also now question his ability to persevere and truly win over a woman. I wonder if he just wants her handed to him on a plate, ready-to-go, heat and serve.. no work involved.

As a general rule, when people have walls it’s because they’ve been hurt. We all have baggage. The really nice guys see the walls for what they are.. wounds.. and if they really like the woman they persevere until the wounds have healed enough to let them get closer.  No one is instantly ready for a relationship.. well unless you’re codependent and then those relationships aren’t very healthy.

All in all.. he could have survived well and probably gotten me to contact him if he’d simply left out a sentence or two.. for instance said the following:

The moral of the story though is this… if you really are going to brag about needing/wanting open-minded people.. be open-minded.

No.. wait.. the moral here is.. “If you’re going to claim open-minded, you better make sure you are.” (Cuz I’ll test you.. seriously, I love devil’s advocate.)

I checked Mr. Douche’s Q/A on OkStupid and found several other alarm bells.

“If one of your potential matches was overweight, would that be a deal breaker?”  – Yes, even if they were slightly overweight.

(girls, you gotta hate money and be completely in shape.)

Yes, no , yes, no, yes, no.. The date that almost didn't happen
Why Worry? I'm Magically Blessed.
Knowing What You Want VS Need