So after my date with “Barks At Dogs”, I wanted a drink. I’d already planned on going out with Chrissy to a bar, and meeting a bunch of friends, so I headed to the bar.

I arrive and it’s drink specials night. $1 wells. Normally when they say $1 wells they mean mixed drinks. If you order a vodka on the rocks, most places will charge you double. Not this place. Vodka on the rocks for a buck.

I then decided to see how many I could down before the drink specials ran out at 10pm. Yes, I decided to get smashed, and announced it to everyone there.

I’ve known Ken for a while now. I met him at the same time that I met the guy I talked about in my “Confuzzled” post.

Ken is a sweetheart. Nice. Passive. Do anything for you. He’s one of those guys you write off as friends, because you’re pretty sure if you actually did try to date him you’d just end up hurting him.

As such, I wrote Ken off very quickly when I first met him. He’s also a little odd which doesn’t help matters any. 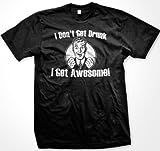 Ken, being the nice guy that he is, decided to help me in my drinking endeavor by buying me a few drinks himself, and encouraging me to drink up.

By 10pm, I had a good buzz going. I didn’t count how many drinks I had, but based on my bill. I know it was at least 14 vodkas on the rocks.

I didn’t stop at 10pm though. Ken bought me more drinks after that, and I didn’t turn them down.

He was being sweet, nice, and attentive. After my date earlier, he wasn’t looking so bad.. but I had no intentions of being more than friends with Ken.

This is where things get fuzzy. I’m missing pieces of what happened exactly, but since I was too drunk to drive myself home.. somehow I went home with Ken. I honestly don’t even think at that point that I had any intention of being more than just platonic with Ken.

I honestly don’t remember leaving the bar, but I do remember walking to Ken’s car. I vaguely remember riding in the car on the way to his place. I woke up this morning with absolutely no clue where in Austin I was, a very rare thing as I always have a backup plan. But I obviously trusted Ken because I did not pay any attention to where he was driving me the night before. (of all the times in my life that I’ve ever been drunk, this is the only night that I have had this much trouble recalling things.. soo not a good sign)

I remember him parking, and myself opening up my car door and puking my guts out. (Sexy right?) And puking. And puking. I remember Ken clearly taking care of me, being sweet about everything, and telling me I’d be ok.

I don’t remember walking up to his apartment, but obviously I did since I woke there this morning.

I do remember knocking over his DVD shelving. His alphabetized collection falling haphazardly all over the floor. I remember trying to put them back on the shelves in the right order, and him begging me to stop. He wasn’t mad. He just wanted me in the bedroom.

I did find some texts on my phone this morning. Evidently, we were texting each other at the bar calling each other “Sweetie” and “Sweetheart”… (yes you can puke now)

But I’m very glad things went romantic, because Ken has a side to him in the bedroom that is HOT.

Outside the bedroom, Ken walks around as if he’s not really at ease or very self-assured. He seems sweet, innocent, passive. In the bedroom, he wasn’t really any of those things. He knew exactly what he was doing, how to do it, when to do it, and more. He’s also packing a pretty good pistol. (He’s a little bit like the married guy on “Cougartown”)

It’s the best sex I’ve had since my “Night of Sexual Healing” a little over a year ago, and boy did I need to get laid.

I woke up this morning feeling sick, icky, yucky, and happy… if just a little confused on where I was.. but I wasn’t confused at all on who I was with. The surprise of being happy with Ken was strange.. and I wonder if maybe I should have gotten drunk with him earlier.

Then he came back from taking his dog for a potty-walk, and we started again. The tone was different from the night before… better different. It was fun. It was sensual. It was amazing.

As he drove me back to my car this morning (after taking me out to get some breakfast), I learned more about him. I thought he was much younger than me. He’s actually just a little older. He someday wants to get married and have kids.

He might just be a keeper… maybe. I’ll have to get to know him better to tell for sure.  And I wouldn’t have even given him the time of day, had I not gotten drunk. Strange huh?

Now just to find out if he feels the same. It’s possible I might just be that drunk chick he brought home once, and decided never again.

Excruciating Dates: When his not drinking makes you really want one.
Why Do I Bother?
Trust Yourself, Woman!

4 Responses to “Luckily I got drunk, or I got Drunk & Lucky, you decide.”