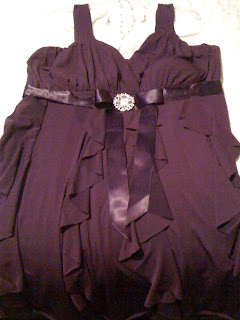 I’m a little late with posting. I know you all were sitting on pins and needles waiting to hear about my Fabulous New Years Eve!

I put on my sexy purple dress and black strappy heel/sandals. The Swarovski crystal necklace I made for my wedding but never wore, and sterling & crystal chandelier earrings. (see pics)

If I do say so myself, I looked fabulous!

My first party to go to, I ended up getting there late (if you’re noticing a trend, don’t worry I’ll add it to my new years resolutions) and wouldn’t be able to spend much time. But I brought them a bottle of champagne, and said hi. They were having a lazy but really cool NYE party, mostly just girls, watching old cheesy girly movies (Josie & the Pussycats), eating some good food and drinking. Later they were going to break out some board games and cards. They were all comfy in pj’s and snuggies. This is what I’ll be doing next year I think. 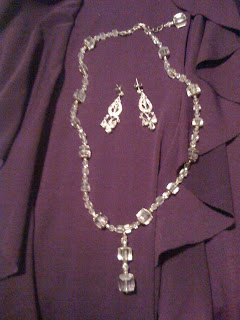 My second party was swanky in a condo downtown which is why I dressed as I did. While he adheres to Austin’s dress code (anything goes) for his parties, everyone is usually dressed up. Dressy suits are not uncommon and cocktail dresses are the generally accepted norm.

My nemesis was there btw. I’ve decided to just start calling her that. I honestly couldn’t care less about Meg anymore, it just irks me that she doesn’t even acknowledge me in public. She won’t even say “excuse me” to me if she bumps into me or ask to pass by. If I’m talking to someone she wants to talk to, she will wait until I leave or come up and talk to them as if I’m not even there. Its hilarious. (She’s mentioned a couple times in my blog – OMG Like Seriously? HS Still Happens, Women Who Hate Women )

The catty girl in me took great pride in the fact that she showed up in a worn out cardigan over some boring shirt with worn jeans. I didn’t even bother looking at her shoes.

While I finally spotted a mutual friend of ours not being monopolized by her (a guy she considers hers, and probably the reason she no longer speaks to me, I’m just guessing here) I went over to say Hi. Sadly I found out that he is also among the fold of the unemployed. We had a great chat. I was surprised that Meg let us chat until I saw that Meg took that opportunity to mingle with my friends at the party.

I thought it hilarious. My friends only knew her by “That ex-friend-bitch” and not her name. So as soon as I’d finished talking to our friend, I went over to socialize with my friends despite her being there. She saw me arrive at the group and left without a word. My friends looked a little taken aback by her sudden leaving, but shrugged it off.

It was then that I mentioned, “Just so you know, since you probably won’t ever see her again, remember that girl I told you about who was a close friend then suddenly put the hate-on for me and I don’t know why? yeah thats her.”

We then discussed why Meg may have a hate-on for me. I mentioned that I thought it was because of the guy, that she’d misconstrued me talking to him or something. Cassie saw the guy which I’d pointed out.

“Him? Really? I didn’t know she had crush on him. Wonder if that’s why she dislikes me too.”

I didn’t want to tell Cassie this, but Meg would dislike Cassie for several reasons. Cassie is thin and hot and single (she used to be a pageant queen). Cassie dated J (the host, a guy Meg also seems to have “dibs” on but will never get). Cassie is nice to everyone. And lastly Meg would not like her, because Cassie is friends with me.

J himself seemed fine just a little down. Its not an easy time to be single, so hopefully its just that.

The rest of the evening was flattering with various compliments from various people. An old “friend” who has always wanted to be more, but leans a little too much to the kooky-crasy side for my comfort, spent most of the evening complimenting me and telling me how much I’m missed. He’s sweet. I so wish I could like him back like that. It’s still flattering though.

And while, I had to keep hands off, when I first arrived to the party I met Cassie and her friends. Cassie, Mel and Mel’s date. Mel’s date was obviously a boob man, and when I arrived and actually most of the rest of the night, made priority to talk to me whenever I was near him and Mel. Unfortunately for Mel, she’s flat chested so I don’t see them lasting very long. It’s usually a very bad sign for a flat chested girl if their man’s eyes light up like a Christmas tree when someone with boobs enters.

Most of the evening though, I spent talking to this girl I used to dislike. She’s gorgeous, sweet, nice, and exotic. She’s Indian and like a size 2 naturally. She comes off as very aloof and prissy if you don’t know her and a bit of a bitch. She’s not. She’s just shy and only feel comfortable talking to people she knows. So it just appears that she doesn’t like you because she’s not talking to you, but she’s all sorts of friendly and social with everyone else.

A few months ago, on some kind of star-crossed fluke, she became comfortable with me. I have no idea what happened or when, but suddenly she started talking to me and being friendly. She’s not the ulterior motives kind of girl, so I was a little taken back until I realized she’s just really shy.

We had a great time talking and laughing. We might become good girlfriends yet.

When the clock struck midnight, I was sitting next to her and her boyfriend and watched them kiss. For once, I wasn’t looking around “OMG someone kiss me”. I was happy and content to just enjoy being there with friends. Had someone kissed me, it probably would have ruined the purity of moment.

It was a new year. This one of freedom, love of myself, confidence, and self-security. While tomorrow I’ll post a whole list of improvements, for now though I’m ok with just being me.